Parties, a Flea Market, and a Concert 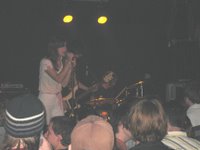 I had a studio visit on Friday with one of my former teachers, and it was really great to get her feedback and suggestions for my work. It's so nice of her to come over and do that even though I've already finished school. Now I have tons of new things to think about both concept-wise and aesthetically as I'm making new work. Her enthusiasm about a body of work that I had kind of set aside gave me a new perspective on those pieces and made me want to go back into them and really work with them again. I don't know how long those pieces might have stayed on the back burner had she not been so interested in them.

I woke up incredibly early on Monday to go to the flea market with my dad, and I didn't come away with much, just a few small things. There just wasn't that much good stuff for sale, and the things that were good were very overpriced. It was still fun to see all of that old stuff, nonetheless. That, and we got to have lunch at Bob Evans, which we don't have in Gainesville, so that was kind of a treat. They have killer bread at Bob Evans.

The Fiery Furnaces concert on Monday night was a bit of a disappointment, because they speeded up and punked up all of their songs, and it really didn't sound anything like the cool, keyboardy, experimental music on their CDs. Not that I want bands to sound exactly like their CDs in concert, but this was a little too different to be that enjoyable. But it's always nice to see live music and to get to see what the singers you've liked for years look like in person. Wes and I both agreed that that opening band, Deadboy and the Elephantmen, sounded better than The Fiery Furnaces.
Email Post
Labels: Bob Evan's buns music that kills The $ART$ World