The "How to Draw" Series: An Introduction 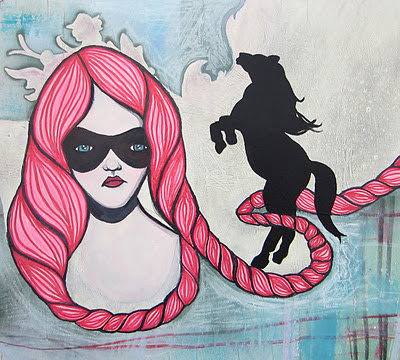 A friend of mine visited a few days ago for New Year's Eve/Day, and we had lots of fun doing artsy crafty things and going to the flea market...  For Christmas, she gave me One Sketch a Day: A Visual Journal, and I have been using it ever since the new year began.  It's so much fun to draw something random every day.  I try not to think about it too much and just draw whatever comes to mind as soon as the pen or pencil touches the paper.  I think this journal will really help me loosen up when it comes to drawing, and hopefully I will get more experimental because of it too.  It will be nice to see how my drawings progress day to day...  Here are the first four days of drawings: 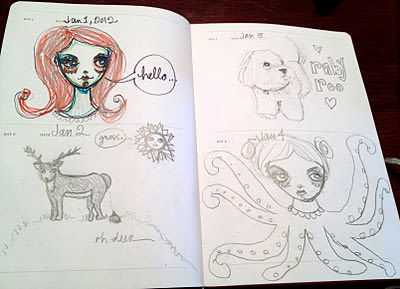 I have been thinking a lot about drawing lately and how my attitudes towards drawing have changed over the years.  Just having the confidence to pick up a drawing tool and have it meet the paper can be so challenging sometimes.  I know a lot of people who say that they can't draw, but I really feel that if they really wanted to learn and made a daily effort to try, they could improve on their skills, even if they don't think they have any to begin with.

I want to share a little story with you about something that happened in my college days that really affected my attitude towards drawing for several years...


When I was nineteen, I had an art professor who was a talented woman, and I looked up to her.  One day during class, she said she needed to talk to me in private, so we went into her office, and she closed the door behind us.  She asked me to sit down, and she said that what she had to say would be important.  I was kind of nervous at this point, wondering why she had pulled me out of class and sat me down...  She sat down too, looked me directly in the eye, and she said, "You are really, really terrible at drawing.  You keep trying, but it doesn't get any better.  I'm going to be honest with you: if you want to continue down a fine arts path and get your degree, you are going to have to stop drawing completely.  You need to do only photo based artwork.  Only photos, no more drawings and no more paintings, understood?"

Dumbfounded and discouraged, I nodded my head, and she said I was free to go.

I didn't draw for years.

It took a really great drawing professor a few years later to get me back into drawing again.  This new professor gave me the confidence and courage to put pencil to paper once again and allow myself to make mistakes, to practice, to learn...  She did all the things a teacher was supposed to do.  She was wonderful.

I stopped again when I graduated because I wasn't able to take the drawing professor's classes anymore, and I really needed her words of encouragement to keep at it.  I should have had the confidence to keep drawing on my own, but my "drawing self esteem" was already so low from the bad professor's words, that her negativity still haunted me when I thought about trying to draw.  It was easier to not try at all.  I still made art, but I used photo processes (silkscreened photographs, collage, etc. - anything that I could do that didn't involve drawing or painting).  They became my crutch.

It wasn't until a few years later that I decided to start trying to draw again.  I had become active on Flickr.com and had started to mark a lot of favorite photos on the website.  I noticed that I was mostly favoriting photos that other uses had taken of their drawn and painted pieces, and I had barely any favorites that were actual photos themselves.  The art I admired most was all drawn and painted.  Specifically, they were all drawings and paintings done of people.

I used to draw constantly as a kid.  I was basically obsessed with drawing all the way up until that professor had her little chat with me... I knew it was something I enjoyed, something I admired in others, and something I wanted to be able to do again one day.

One day, I suddenly decided that it was time to try drawing again.  And I wanted to draw people.

I was out of college at this point, so I decided to make my own art assignment.  I took three photos of people I admired, and I drew them every day.  I used photos of Charles Bukowski, Jewel, and Jack Kerouac.  It was so painful at first, the drawings were so bad, and I didn't want to do it - I didn't want to see myself fail at something I loved so much.  But I did it, and to my surprise there was a huge improvement just after one day!  Imagine the amount of improvement that came after one month of drawing the same three people from the same three photos...


I stopped drawing from those three photos after about a month of daily drawing because I was too excited to start drawing all sorts of other things and see what else I could do!  Of course now, I go through periods where I draw less or maybe I don't draw for a few days, but no matter what, drawing is still a huge part of my life and my attitude towards the art form is very positive.  I have finally banished the voice of my former professor telling me I can't, and I have replaced it by constantly telling myself that I can and that I should at least attempt to draw something every day.  My new little Sketch a Day book will help with that also!

I am telling you the story about the bad art professor because I want you to see how you can overcome your "artistic doubts" and fears toward doing something creative.  I am by no means an authority on drawing - I could use a lot of improvement myself, but I can say that I do draw almost every day and love the feeling of the act of drawing - the quiet focus, the deep study, the truly "being in the moment" feeling I get when I draw...  So if you have had doubts about drawing in the past, I want to offer you a few tips to motivate you and get you drawing again... After all, we all used to draw without abandon when we were kids, right? 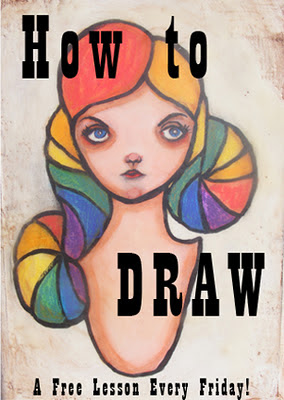 This Friday, I am starting a new series: "How to Draw" featuring a new FREE lesson every Friday!  Get your sketchbooks ready, and be sure to follow my site so that you don't miss a lesson...
Email Post
Labels: art drawing how to draw