The Lines on Her Face 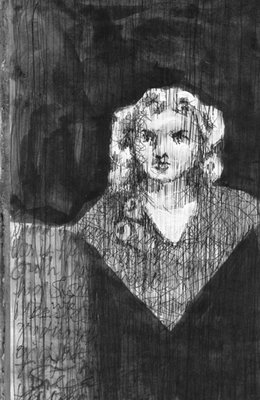 This drawing is from an old sketchbook, and it's a candidate for a sketchbook submission that one of my former teachers requested from me. I spent awhile today getting images scanned in and preparing that submission, and it's so interesting to look back at all those old and almost forgotten drawings. I notice that the drawings trigger other images and memories along with them - where I was was when I drew the piece (physically and emotionally), what other people had said about the drawing long ago, the people who were around me while I drew it, the feelings I had while making the piece, the decision process that went into the work.... I wonder if looking back at my sketchbooks can generate faster or more vivid recollections than when I look back at my writing journals. It's not exactly easy to compare or gauge differences between what the two can trigger, but it's something to think about.

My weekend went fast: an opening and a party on Friday night, lazy Saturday, and an Oscar party on Sunday... This week I have been having something of a business identity crisis, even though I am still in the planning stages of starting a business. I think everything is pretty much resolved now. I've been having something of a creative block so far this week too, so I've been focusing more on entering juried shows and various other ways of self-promotion. Why does the phrase "self-promotion" always sound like such a narcissistic, negative thing?
Email Post
Labels: drawlings The $ART$ World