Of Birthdays and Blythe Dolls

I just uploaded the baby's birthday photos from last week, and look how sweet this one is: 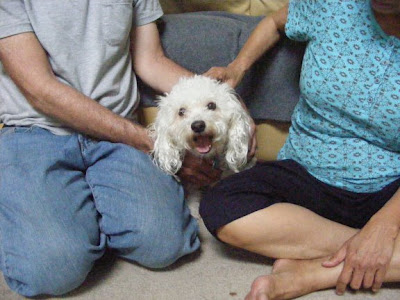 She just looks ABSOLUTELY thrilled that it is her birthday, as she should be! It was a fun day spent eating just treats, no regular dog food. That's how a birthday should be, right?!

I dug some old goodies out of storage at my parents' house the other day, including three Blythes that I got for about $5 each (!!!) back in the early 90's when I was around 10 or 11. Blythes weren't popular then, but as soon as I saw one at a flea market, I had to had her. Here are some photos of one of them; I made the outfit for her around the same time as when I bought her out of some vintage barbie pants and trims. 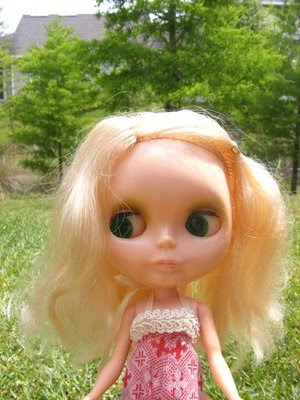 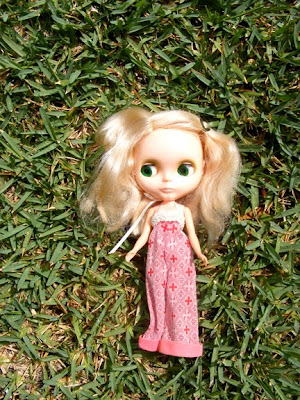 What's interesting is how my paintings now have lots of big eyed girls that look like these and other dolls I collected when I was little. My parents used to drag me to flea markets when I was younger, and I hated every second of it until I started to see big eyed dolls from the 60's and began to collect them, then flea markets became hugely fun treasure hunts! From time to time I like to draw these dolls; their faces are just so expressive and kitschy! I'll post more photos of dolls I uncover at their house in the next few days. It's so funny that my childhood toys were really not from my childhood in the 80's at all, but from that of the 1960's...

I'm trying to get a handle on the little "displays" of cute stuff that are all around the apartment, and this one is going to get a facelift today: 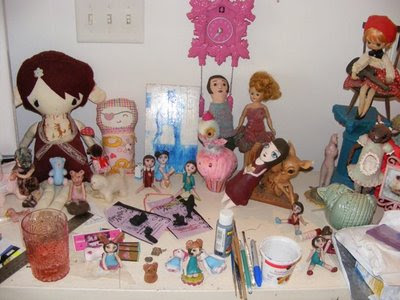 It's a mix of antique dolls, dolls made by Etsy friends and artists, and dolls I've made myself. I'm thinking of rearranging lots of little things in my house to give it a bit of a new look. I should really take some before and after photos! Change is good...

I've been working on a new multi-layered screenprint of a big-eyed girl with bear ears, but I need to figure out how to connect my old scanner/copier to my new computer. I think I will need to search my "random computer crap" drawer to find the software, sigh. Pictures soon, I hope!

I'll leave you with one last photo of a doll I found online a while ago. She, of course, has big eyes but is a lot older than the Blythe dolls. She is a composition doll from around the 1920's or so, and I got her on eBay for under $10 including shipping a few years ago! They didn't mention any dimensions in the auction description, so I assumed she would be about 8" tall - she came in the mail in a huge box and turned out to be 2 feet tall! Awesome! She also arrived in this hand embroidered outfit, cutest thing ever. 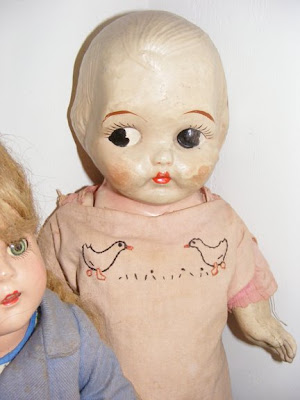